“You’re gonna have to give me a while, I don’t want to slow you up”  I nervously told Sam Hill, Mike Jones and a few others as they queued behind me at the start of my first run. Early on a Sunday morning in Feb 15, as  200 men and women were throwing them down the slopes of the pemberton bike park as part of the 1st round of the WA Gravity enduro (wage). The event consisted of 6 timed downhill (mostly) runs and climbs not timed.

Being in the masters category (40-49) I foolishly thought I might do ok. Little did I know this is actually the most popular and most fiercely contested age group in cycling in WA. Which is why Sam Hill and co were queuing behind me. The riders had been split into 2 groups with one group doing runs 1 through 6, and the other doing 3,4,5,1,2,6. As elite riders in Group 1 they had already done runs 1&2 on the other hill, before the 2nd group (masters) had all completed runs 3. This was not the way I would have planned to start my first enduro race. 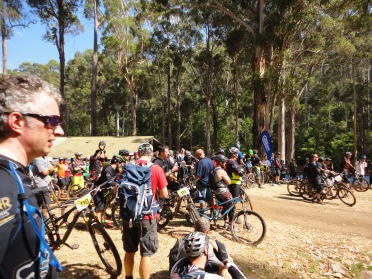 The timing at the gate at the top of each run gave each rider 30 seconds between each rider. 30 seconds seems like an age when you are waiting for the light to go green and you have some of the world’s best DH World Cup guys directly behind you in the queue. Hopefully they would give me at least a minute.

I had been practicing the day before on this hill. I knew the tracks on this side of the park were incredibly dusty, off camber and rutted with a few lung busting climbs just to finish you off. Luckily I had been adopted into a random group of about 6 guys had all joined up on the trails to practice each section on the Saturday. These guys were really sweet, and on the Sunday whoever you bumped into was wishing you well and asking about how you went on your runs.

Continually worried that one of the elite guys would be breathing down my neck on the run, I was going for it on my first 3 runs. Breathless,  feeling a bit dizzy and exhausted I finished the first three runs. I was pleased that the elite guys had not over taken me, they very kindly took note of my request at beginning. The bike was running well and life was good.

Over to the other hill. I had practiced only one of these runs early before the event and there were demons in my head about some of the woodwork obstacles on run 1. I bumped into DH legend Chris Kovarik at the top of the hill, so I shook his hand wished him well and got ready to start. At 14 seconds he holds the greatest winning margin in the DH world cup from back at Fort William in 2002 (check it out on Youtube).  Luckily there was no one behind me now at the gate, so much less pressure – just me against the track.

Beeeeeeep…….and the green light goes off on the gate, so I head off. There is not much in the tank by now so I am conserving whatever I can. There are lots of doubles at the top which I am rolling fast and absorbing, my jumping ability waining together with my energy. The first big obstacle looms into view, a wooden rack dropping a few feet into a berm. Skill wise it’s nothing and I have done harder things many times. However, after having only rolled this in practice despite its still a threat. I must jump it in race, cleared it – phew, nicely set up for the sweeping right hand berm. Up to next obstacle an 8ft high wooden roller or the chicken run. One of the photographers hollered, and I went towards the woodwork for the first time (I had taken the easy route during practice). Cleared it, and got some well needed encouragement from the photographer at the same time.  Next I was flying down the following fast left hand berm. Massive thud as I hit the dirt. I went down hard for a reason I still don’t understand. The front tyre had slipped out from beneath me. System check done, all ok apart from knee and foot. I had hefty d30 knee pads on so I knew that my knee would be ok by my foot was really throbbing. I pulled the bike off the trail to assess the damage. The bike had landed on the side of my left heel and I thought at best it was a bruised bone. It hurt to walk but was ok on a pedal, so after straightening the handlebars I limped on. 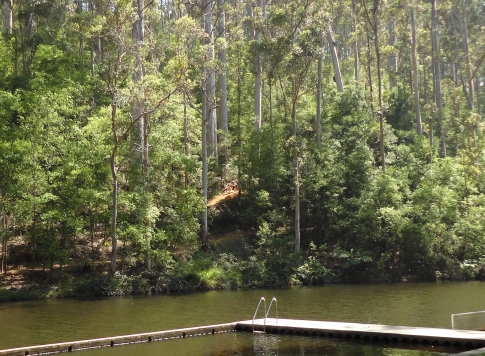 With the run over I had a choice. Do the final two runs (and climbs) or pull out and score no points for this round. I decided to press on. Run 2 was pretty horrible. A nasty rock garden and a few uphill sprints that went on and on. Just what I needed when I felt so broken.

By the time I was doing the 6th and final run I was in a better place. I was looking forward to finishing and actually started to enjoy the final track. It was steep flowey track and some massive wooden berms and the looming finish gate was giving me the motivation to dig deep. I managed a low, fast and semi stylish looking tabletop for one of the final jumps where a crowd had been gathering all weekend. A short  section through the woods by the lake and I saw the finish gate, touched my RFID bracelet on the timer and it was all over. It was a relief to see my wife there waiting for me, although I couldn’t manage much conversation at the time. After an ice pack and a few drinks I was feeling better to watch the podiums and prize giving.

No suprise my queue buddy DH legend Sam Hill  won the event and Chris Kovarik came third in elites. I was way down the field in Masters and just pleased that I had completed the event (many didn’t).

Afterwards a few trips to A&E and an Orthopedic consultant luckily my heal injury was just a bruised bone. Off the bike for a while, and no weight bearing through my heal for a while. Boo 😦

Luckily the positive memories last longer and overall Pemberton was great fun, good trails, great event and there was a really good atmosphere between the riders. I now have a new max heart rate of 197, a pair of crutches that need to go back to the hospital and a vow to my wife that I wont be doing any bike races for a while. At least until bubba is a bit older !