After getting my Stumpjumper resprayed I didn’t want the old reverb seatpost (external hose) scratching off all the paint as it extends. Solution – My solution to get the stealth version of the Rockshox Reverb and perform some DIY internal cabling. This would also look much cleaner and not ruin the aesthetic lines of the bike. This frame (2010) was not made for internal cabling so I was a bit nervous about where to drill the frame.

I decided that I could sacrifice one of the cable mount holes on the down tube. I drilled out the aluminium captive nut which usually holds the cable mount. This hole alone was sufficient to get a cable and grommet through, so no need to actually disturb the carbon fibre material. I had already inserted a gear cable outer down the seat tube and around the BB and back up the down tube to see if the frame allowed access. Luckily it did :).

With a torch and a bit of gear cable I managed to hook the gear cable through the hole I had made in the downtube. Once through I simply unscrewed the hose from the reverb handlebar control for the seatpost (keep hose higher than seatpost to ensure you do not lose hydraulic fluid).

I then screwed the red RS barb into both the seatpost end of the gear cable outer and the handlebar control end of the seatpost hydraulic hose. I could then pull through the entire cable & hose through the hole in the downtube. Once I had pulled through enough hose I inserted the seatpost (Make sure you leave the seatclamp installed otherwise you may need to start from the beginning !).

At the other end it was simply a case of installing a grommet to protect the frame, and then removing the barb (& gear outer), and finally managing the hose run back to the control unit on your handlebar. The standard hose on my reverb was too long so I cut off about 10 inches from it using cable snips. I carefully screwed back onto the barb on the handlebar control and hey presto, an internal hose routing, with out the need for a bleed of the hydraulic oil or any other shennanigans. 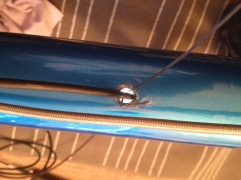 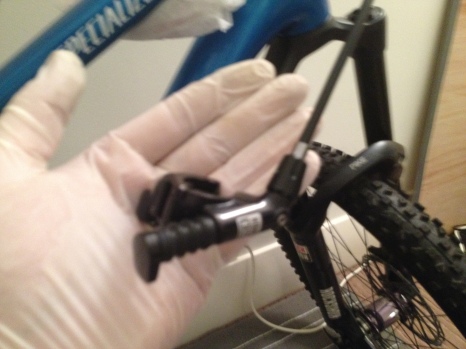